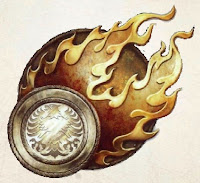 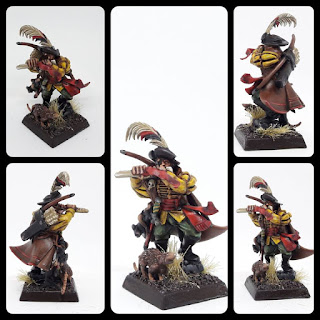 To complete the job I made a dramatis personae for the model here
No comments:
Email ThisBlogThis!Share to TwitterShare to FacebookShare to Pinterest
Labels: Mordheim, Old stuff, Saved from the bitz box, The men of the Ostermark (WHFB Empire) 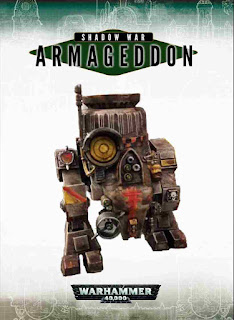 Greetz one and all,

today I’m introducing a model I made last year, or rather in the last few years :)  It's one of those figurines you know has a lot of potential, but for some reason you just can't seem to drag it out.  I've worked on it several times but never got around to finishing the deal.

The model; is an old Rackham AT-45 walker (don't know the name).  I alway's wanted to turn it in to some kind of non combat thing a sort of npc so to say.

the paintjob: Hmmm, it's been a while, ... if I remember correct I used a lot of layers (bone and white colors)  some transfers for detailing and washes.  Sorry next time I'll try to write things down.

The rules:  The rules included here are for Shadow Wars Armageddon, but I'm considering using him in Necromunda as well :) 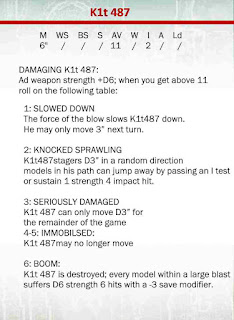 ohhh, and the scenario :)
No comments:
Email ThisBlogThis!Share to TwitterShare to FacebookShare to Pinterest
Labels: Inq28, inquisitor, Saved from the bitz box

The men get a Judge

Greetings one and all,
A few years ago I had this “brilliant” idea, that I’ve worked on ever since.  Why are there no Mordheimers in Mordheim …  Where are the people that lived there, that want to reclaim their land be it on true or false grounds.  It’s a time of civil war, the government of Ostermark is corrupt and in disarray, why is no one claiming this region as theirs, apparently there is a lot to be found with all these war bands flocking to city of the damned?

One of my first real fleshed out idea’s was a Judge, roaming  Mordheim to clean it’s streets.  Not like a witch hunter but as a policemen patrolling “his” city …

My local gaming group picking up Mordheim again gave me some incentive, as did the “Hired Swords” completion on the Mordheim Facebook group.  (although I misinterpreted there rules and made a dramatis personae J ) To pick up the model once again and get it finished at last after (I don’t know) 12 years or so … 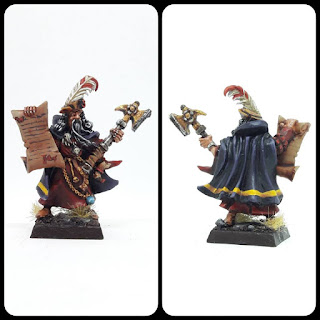 I stayed true to the original concept of the conversion, gave the right arm another purpose and gave him another hat.  The right arm is from a Skaven kit with a repositioned thumb (making left right etc J )  There are a lot of things that could have been better; but that’s what got him stuck in the project box in the first place so overall I’m pleased with the result and glad that he can actually roam the streets of his Damned City …


I even made some rules for Judge Johannes Wagner; not that I claim to be a rules writer or rules lawyer or anything like that. It was part of the challenge :)

so by doing this I completed one of my Bingo goals; finish an old project


No comments:
Email ThisBlogThis!Share to TwitterShare to FacebookShare to Pinterest
Labels: Mordheim, The men of the Ostermark (WHFB Empire)

It has been a very very long while since I posted anything in this blog.  I'm not making any promises, but I spend a lot more time behind a brush these day's so I might as well post some words about my progress here.  For the moment I'm working on everything and nothing all at once.  The main focus being skirmish games and mainly Warhammer (fantasy and 40k) but with a big interest in Gaslands and some Wild West adventures in Tombstone ...  To give me some focus the Goblins have provided me with this cool little thing called the Golden Goblin Bingo 2018 ... A challenge to complete 14 quests in wargaming land ...

1. Convert a model with a freehand greenstuff sculpt. (7)

I realize this probably isn't the best read ever; but it establishes a basis for what I'm going to do in the coming few weeks.  Was this necessary for you ... probably not; but now I've got a little reference point to work from :)

I'll be back soon I hope
Guido
2 comments:
Email ThisBlogThis!Share to TwitterShare to FacebookShare to Pinterest

The old world is not dead 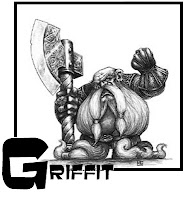 Greetz one and all

Although the people of nothingham pulled a master stunt and brought a new world to our gaming midst, I don't think the old world is dead.  As a matter of fact it most likely has never been more alive in my head.

I am not one to judge on rules and game play as I seldon actually play.  But where I kept a large part of my collection unharmed from my fantastical mind, but now my sculpting tool and cutting knife can finally create all those strange ideas.  I no longer have to fear that gw will one day use all my old clansmen for there new version of warhammer.  The old world is dead long live the old world :)

This is not saying I'm not doing anything in the age of sigmar, I just find it liberating that all boundaries are gone while still leaving me with a wonderful collection of models, story's, rules and ideas :)
No comments:
Email ThisBlogThis!Share to TwitterShare to FacebookShare to Pinterest
Labels: Longbeards

The local store asked me to paint up some stuff for there release party today.  Unfortunately there package didn't arrive on time so I ended up painting a battle board and 1 sigmarine instead of 18.

For the time spent on it the results are fine.  But for you "dippers" out there; don't dip gold.  The dip washes off all the shiny stuff and makes for a dull brown look.  So I ended up re touching the whole model, and still wasn't satisfied with the results.

Anyhow, here are some crappy cellphone pictures (had some real life work and deliver the goods on time)

No comments:
Email ThisBlogThis!Share to TwitterShare to FacebookShare to Pinterest

Greetz one and all,
This week's update brings an update to my arch angel force.  I once started an all terminators blood angel army to emty my bitz box, but got suckered in an upgrade when the new codex and models got released.
Brother Giron has a few personal markings including the black fist of "the wrenched furry", earned during the cleaning of the so named space hulk 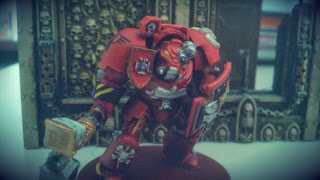